One of my favorite comic book panels of all time comes from Daredevil #233 (also during one of the greatest story-arcs ever, “Born Again”). Captain America is trying to determine who Nuke is from a general who plays coy. The general proceeds to butter Cap up, talking about our favorite Star-Spangled Avenger’s loyalty and commitment. It’s then that Cap grabs the American flag and says “I’m loyal to nothing General, except the dream.” 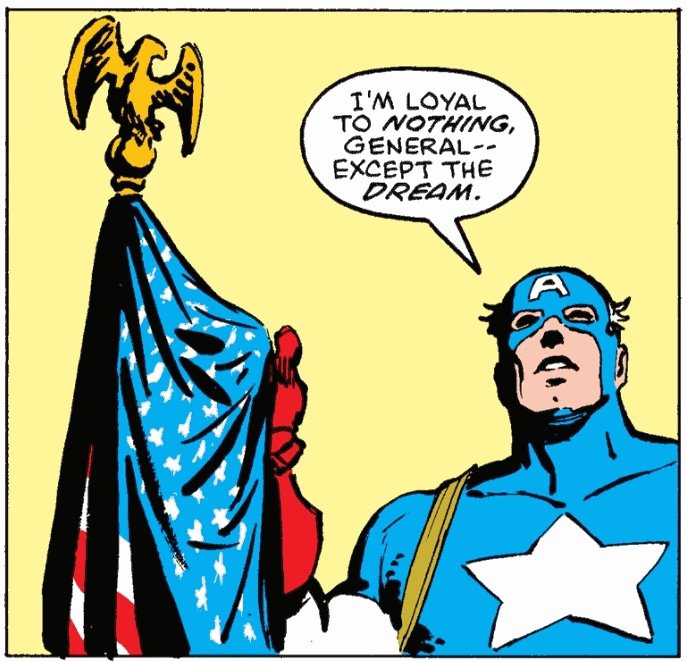 It’s a panel that defines Captain America and the idealized version of America that he represents. There are plenty of other memorable moments like that one throughout the character’s history, but the simplicity of the panel and the short but effective dialogue does more to highlight Cap than any other.

I mention this panel because of my personal beliefs. America is not just a country or a nation, it’s an idea. It’s flawed in its execution and the idea of a place where everyone is treated equal is constantly a work in progress and flows against the current of human nature. That’s what I believe. I believe in the idea of America being a symbol of hope – by no means better than anyone – but an ideal to strive towards, to steal the line from Superman. Part of believing this is acknowledging the country’s flaws. I am an idealist, sometimes overly optimistic, but I do not shy area from the fact that America being “the greatest country in the world” is largely fiction. It CAN be, and it SHOULD be, but in order to get there, we must believe in the idea and doing the right thing.

These beliefs are directly reflected in Patriot-1. They are even more prevalent in Patriot-1: Ultimate Edition. That’s what Patriot-1 is all about and what the character represents. You can call it my version of Captain America or whatever, but it’s an outlet. I’ve always liked patriotic heroes, Captain America and Superman being the most prominent. To be fair, while Cap is more representative of the American ideal, Superman is more so the human ideal.

If you follow me on Twitter, you can get a pretty good sense of where I align politically.

While on the surface, Patriot-1 might look like it’s steeped in American jingoism; it’s not, not at all. In fact, in the book there’s more than once where the characters – both good and bad – highlight America’s issues. That’s an important aspect when writing these patriotic characters. Captain America, Superman, hell even going back to The American Crusader, aren’t champions of what America is, they are champions of what it can be, that’s where Patriot-1 stands. That’s why you don’t see some extremist circles using Captain America as a symbol, because they don’t believe in what he stands for.

Writing a character that represents this ideal can be a little difficult these days. Ta-Nehisi Coates is currently tackling the issue in his phenomenal Captain America run, but that is also in the context of the Marvel Universe and a follow-up to their “Secret Empire” storyline. Not to mention, everyone knows Cap these days, especially thanks to the movies. So where does that leave a character like Patriot-1?

When I originally created and wrote the original version of Patriot-1, it was meant to be an action-packed thriller that mixed real-world Tom Clancy-esque storytelling with the idea of a costumed hero. The deeper meaning to the story was there, but it didn’t necessarily go beyond the surface. However, as I constructed the sequel under the specter of a chaotic time in America, my own convictions were reaffirmed and it started to reflect in my work, especially Patriot-1. That’s why The Ultimate Edition goes deeper. That’s why it delivers a more in-depth message about what’s at stake both in the context of the world within the book and the world outside our window.

The challenge of writing a new character who essentially wears the American flag – especially this day and age – is doing it in a way where you have to separate the country from the ideal. You cannot write a true patriotic character, especially in the same vein as Captain America, without acknowledging the flaws of the country throughout its history, within its leadership and so forth. That’s why that panel from Daredevil #233 stands out to me so much and why Patriot-1 is an important work.

What’s interesting to me is that both through random internet comments and even things I overhead at New York Comic Con, that some people assumed that Patriot-1 is a far right story or “militia” thing. That’s something I NEVER heard during the original edition’s release. Of course if you know me or you’ve read the book, you know that is VERY FAR from the case

If you missed the Kickstarter campaign, PATRIOT-1: Ultimate Edition will be available for pre-order soon!